How do the words used by others contribute to our opinions about things we haven’t directly experienced?

What kind of power do words have? Your teacher will prompt you with a category and you will describe your favorite and least favorite example from that category. Category options: restaurants, television shows, musical artists, sports teams, colleges, or books.

When you have your two lists, add your words to a shared Google doc provided by your teacher - one list for the favorites and one list for the least favorites. Don’t worry if there are lots of duplicate words from other classmates. Your teacher will make each list into a word cloud using a generator like MonkeyLearn and share them with the class.

How do you think the general public would feel about your least favorite?

Next, examine this word cloud and in your notebooks, jot down your responses to these three prompts: 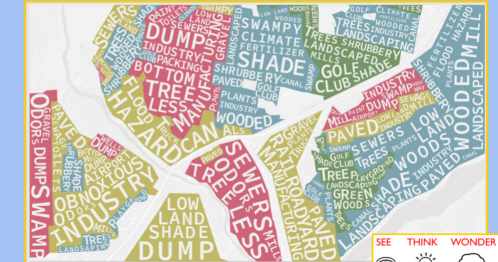 Maps courtesy of the UR Digital Scholarship Lab, ESRI, and The Science Museum of Virginia: “The Lines That Shape Our Cities” StoryMap http://ow.ly/dkGa50CRkPS

Your teacher will direct you to share your responses either with an elbow partner, on big paper, or a collaborative document such as a Google Doc, or a Jamboard.

Once you have shared your initial observations, navigate to this StoryMap, entitled “The lines that shape our cities.” When you view the landing page, scroll down through the first few data visualizations. You will see the word cloud you just examined. What new perspectives does this version show? 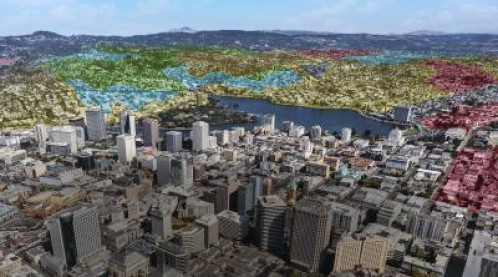 The lines that shape our cities

Connecting present-day environmental inequalities to redlining policies of the 1930s

As you continue to scroll down the StoryMap, take a moment to examine the map and quote:

“Now imagine that these descriptions have had a lasting impact on home values, city services, education, crime, and the life expectancy of the people living there–decades after these words were chosen.”

"The lines that shape our cities" - StoryMap from the University of Richmond Digital Scholarship Lab, ESRI, and The Science Museum of Virginia

Turn and talk with an elbow partner about your predictions of the long-term effects these descriptions might have on neighborhoods. Share your thoughts in a larger discussion with your class. If working virtually, your teacher may allow you to use videoconferencing or a collaborative document such as a Google Doc, or a Jamboard.

How might redlining policies of the 1930s have contributed to the persistence of inequitable environmental stressors today?

During the Great Depression, the federal government established the Home Owners’ Loan Corporation (HOLC) as part of the New Deal. HOLC assessors rated city neighborhoods on maps according to a grading system and banks used the maps to determine which neighborhoods would be safest for financial investment. “A” meant the “Best” investment and “D” meant the investment was “hazardous”. As you will read in the“A brief history” section of the StoryMap, despite the fact that “[r]acism, nativism, and class privilege are clear in the grades,” these maps were used for decades and “created or codified adverse conditions that still affect cities today.”

Read through the section entitled “A brief history.” 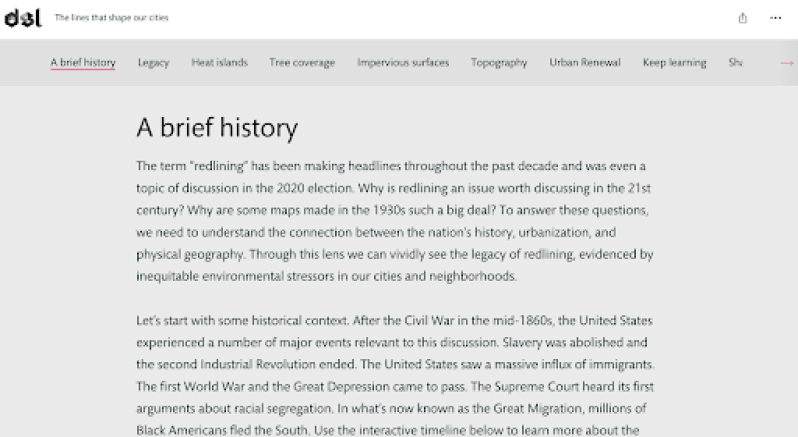 As you read, make a copy of and complete Part I of this reading guide. 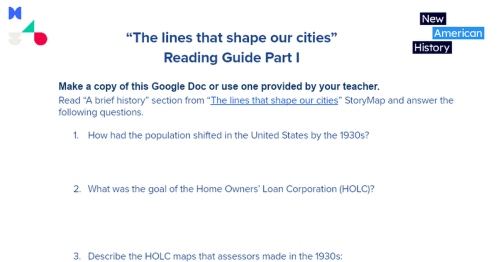 NAH The lines that shape our cities” Reading Guide Part I

Make a copy of this Google Doc or use one provided by your teacher. Read “A brief history” section from “The lines that shape our cities” StoryMap and answer the following questions.

What is the connection between housing patterns in the past and the natural world that city-dwellers experience today?

Once you have read the “A brief history” section, scroll through “The lines that shape our cities” StoryMap to the “Legacy” section. 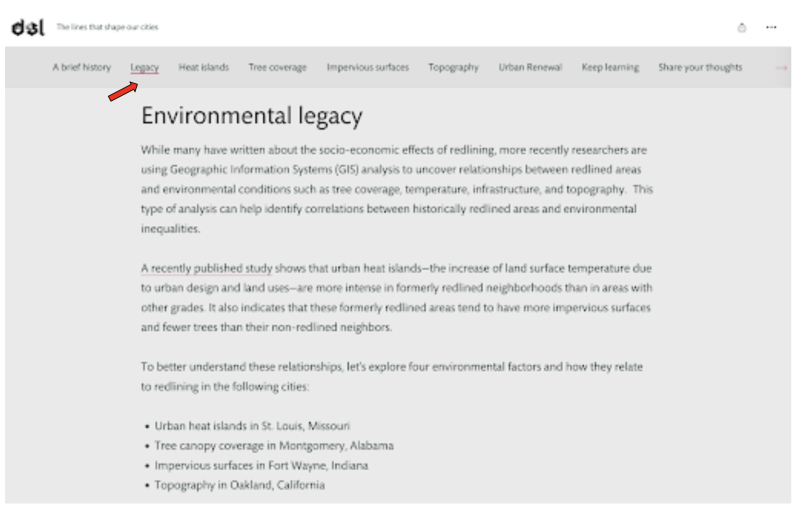 This portion of the StoryMap will introduce you to some urban inequalities related to the physical environment, using case studies from four U.S. cities:

As you read, make a copy of and complete part two of this reading guide. 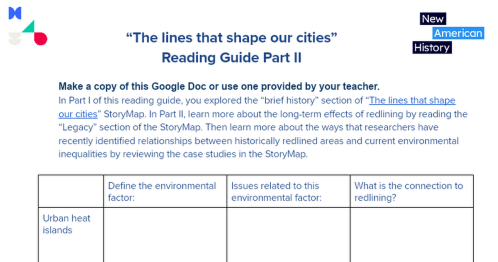 Make a copy of this Google Doc or use one provided by your teacher. In Part I of this reading guide, you explored the “brief history” section of “The lines that shape our cities” StoryMap. In Part II, learn more about the long-term effects of redlining by reading the “Legacy” section of the Story...

Once everyone in your class has had a chance to explore the StoryMap, your teacher will provide a series of Chalk Talks for you and your classmates to respond to. You can either use big chart paper or Google slides, as directed by your teacher. 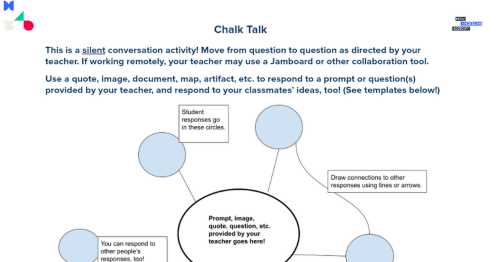 This is a silent conversation activity! Move from question to question as directed by your teacher. If working remotely, your teacher may use a Jamboard or other collaboration tool. Use a quote, image, document, map, artifact, etc. to respond to a prompt or question(s) provided by your teacher, ...

Why do we need green spaces?

To learn more about research on nature and human health, listen to this 12-minute Short Wave podcast from NPR entitled “Good Things Come in Trees.” When you are finished, you will complete a hexagonal thinking activity. 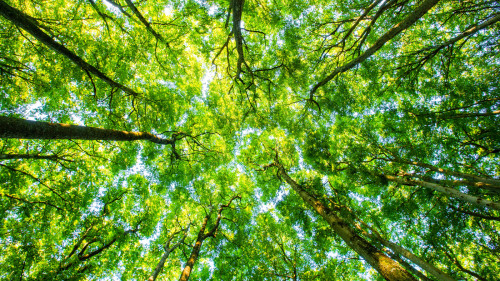 Do you ever feel better after walking down a street that's lined with lush, green trees? You're not alone! For decades, researchers have been studying the effects of nature on human health and the verdict is clear: time spent among the trees seems to make us less prone to disease, more resistant to infection and happier overall. Aaron Scott talks with environmental psychologist Ming Kuo about why we need greenery and how you can bring more of it into your life.

Once you have listened to the podcast, your teacher will instruct you to either work on your own or in groups to make a web of hexagons connecting ideas and key terms from the podcast and the StoryMap.

Hexagons have six sides and can connect on each of the sides to another hexagon. When each hexagon represents an idea, you can create your own Hexagonal Thinking web, based on the links you make between terms.

The example below shows how a student might connect hexagons to their thinking about Ancient Egyptians. Note how three of the connections are highlighted with an arrow and further explanation.

Your teacher will make a shareable copy of this Google slideshow and will let you know which slide you’ve been assigned to work on. 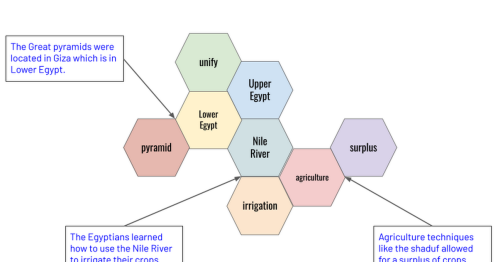 Google Slides template to use with small groups/breakout rooms created by @stacyyung Note: To easily change the slide headers from “Groups,” to “Breakout Rooms” (or vice versa!) go to slide master ( View -> Theme builder) and ctrl+f to find and replace “group” to “breakout room” Learn more about ...

Your teacher will lead the class in a debriefing about the webs you and your classmates made with a focus on why it is important for us all to have access to green spaces.

﻿What opportunities might you seek out to positively improve environmental conditions in your community?

Using what you have learned in this lesson, reflect on the environmental health of your own city or town. Working on your own or in groups as your teacher directs, make a copy of and complete this local environmental assessment for your community. 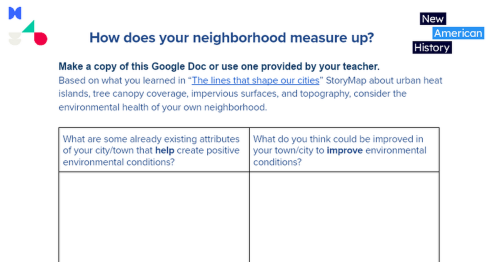 NAH Copy of "Your neighborhood" -The lines that shape our cities

Make a copy of this Google Doc or use one provided by your teacher. Based on what you learned in “The lines that shape our cities” StoryMap about urban heat islands, tree canopy coverage, impervious surfaces, and topography, consider the environmental health of your own neighborhood. What ar...

Your teacher will lead the class in debriefing. Your teacher may offer a collaborative document such as a Google Doc or Google Slides or a Jamboard to support the discussion, and for sharing ideas you may want to revisit them later.

Finally, click on the “Share your thoughts” tab of “The lines that shape our cities” StoryMap and leave your thoughts about redlining using the red “ +Add Your Feeling” button above the map. 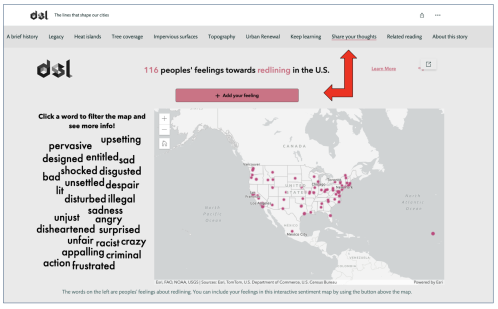 The lines that shape our cities. 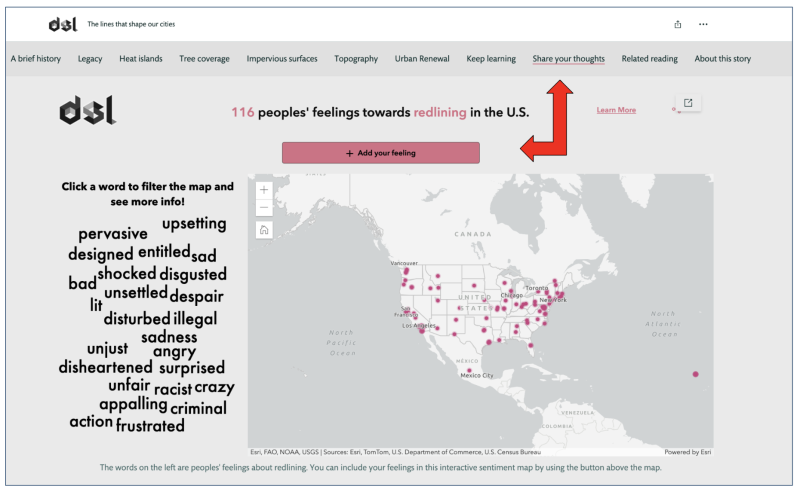 Share your thoughts...The lines that shape our cities
"THE LINES THAT SHAPE OUR CITIES" - STORYMAP FROM THE UNIVERSITY OF RICHMOND DIGITAL SCHOLARSHIP LAB, ESRI, AND THE SCIENCE MUSEUM OF VIRGINIA