Collective memory – how a group of people remember a past event

Commemorate – to honor the memory of an important person or event

Hijack – an individual or group forcibly seizing an aircraft

Oral history – detailing of an event or experience by an individual

Terrorist – person who uses violence or intimidation to advance his agenda

This Learning Resource explores the largest terrorist attack on United States soil in the modern era. While many students are too young to have experienced this event firsthand, they may have relatives, neighbors, teachers and friends whose families were directly impacted by the loss of lives, including the victims, many who served as first responders, their families and colleagues. For all Americans, this day is one of tremendous loss and is commemorated with reverence. In discussing this topic, it is important to be respectful and aware of these losses.

This Learning Resource was developed as many schools were closed during the COVID-19 global pandemic. Suggested tips for teachers and students engaging in remote learning are included, and some learning strategies and directions have been modified to assist schools with both face to face and virtual learning.

What should Americans know about September 11, 2001?

On September 11, 2001, terrorists attacked two American cities using hijacked commercial aircraft as weapons. They flew airplanes into each of the Twin Towers, the two tallest buildings in the World Trade Center, a business complex in New York City. Another plane flew into the side of the Pentagon building in northern Virginia which serves as the headquarters for the U.S. Department of Defense. An additional attack on a target in Washington, D.C. was thwarted by the passengers of United Airlines flight 93 who fought the hijackers for control of the plane before crashing into a field in Pennsylvania. Nearly 3000 people were killed, including all of those aboard the four planes and many of those in the buildings that were hit. This attack shocked the world and left a lasting impact on America. 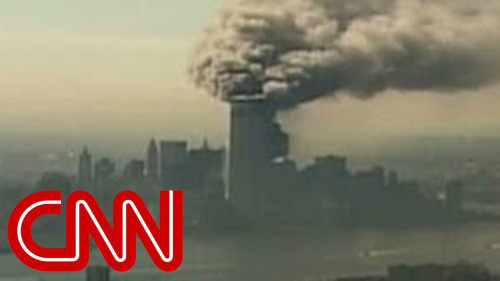 Look back at how September 11 unfolded

On the eleventh anniversary of the September 11 terrorist attacks, CNN looks back at the events as they unfolded that day.

As you watch the video from CNN and learn more about the events of September 11, 2001, record your thoughts, observations, and reactions in the 9/11 Reflective Journal.  Once you are finished, turn and talk with a partner to discuss your responses. If working online, your teacher may allow you to use a Padlet, Jamboard, or another collaborative tool to share your responses digitally. 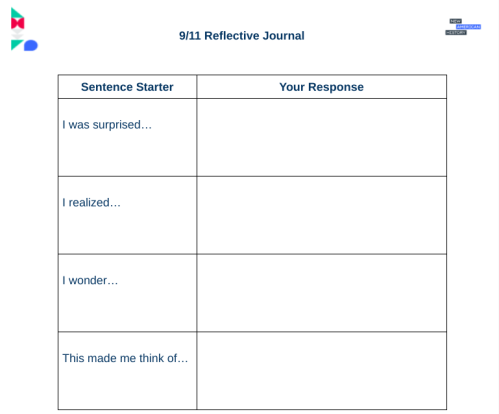 Next, examine this collection of 9/11 Response Art located at the 9/11 Memorial and Museum. Choose one that speaks to you and complete the final portion of your reflective journal, sharing the type and name of the artwork, as well as the impact this piece had on you. 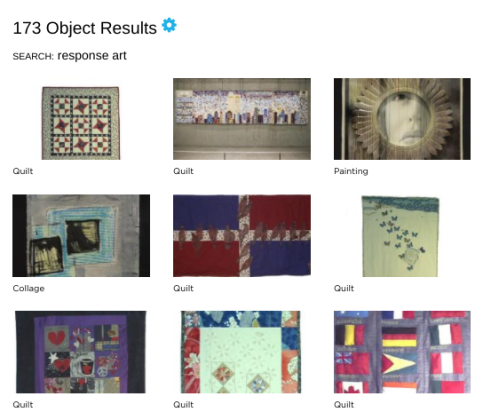 If working remotely, your teacher may provide opportunities to collaborate with classmates using video conferencing, access to an online chat feature, or breakout rooms.

Your teacher may ask you to submit your reflective journal or record your answers on an exit ticket.

How does perspective influence the recording of historic events?

Imagine you are planning a presentation or exhibit on the events of September 11, 2001. Whose voices need to be included in order to provide a full account of the event?

Create a list of the types of people you would want to interview to include in a presentation. Consider the varied locations, professions, and vantage points of people who were there that day. Also, consider people who were not in the targeted areas, but who might have witnessed the events via technology. What perspectives could they offer?

Next, sort those people into categories. What are the main groups of individuals who could provide the details of the attacks?

Turn and talk with a neighbor to compare your groups or, if working remotely, your teacher may provide opportunities to collaborate with classmates using video conferencing, access to an online chat feature, or breakout rooms. Are there any additional groups or individuals you need to add to your interview list? 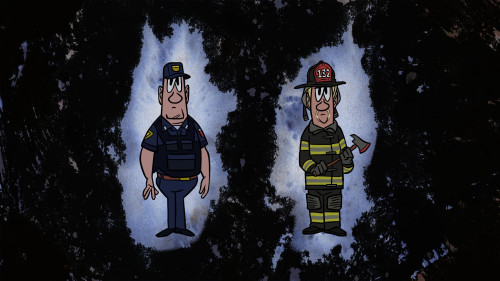 A Peabody Award-winning effort in partnership with the National September 11 Memorial & Museum to record at least one story in honor of each of the lives lost during the attacks on September 11, 2001, and the February 26, 1993, World Trade Center bombing.

Next, choose one of the oral histories of September 11 as recorded by Story Corps and take the following steps:

As you listen, create a list of questions that prompt and support the answers you are hearing.

What additional questions would you ask?

What additional information do you want to know?

How do different perspectives impact the collective memory of historical events?

Compare and contrast the experiences of three witnesses of the 9/11 attacks by listening to oral histories from the collection compiled at the National September 11 Memorial and Museum. You can also click on the transcript option if you prefer to read their stories. Use the 9/11 Collective Memory Graphic Organizer to help organize your thoughts. 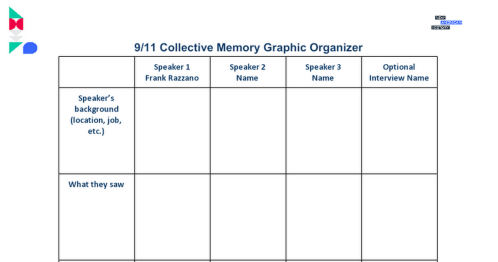 While eyewitness accounts can be a valuable resource to historians, they are not always complete. Sometimes emotions can impede an accurate description of events. Often witnesses only experience a portion of an event so they can provide only a partial description. Therefore, historians have to seek numerous sources in order to determine an accurate account of an event.

What information do you still want to know from these witnesses?

You may want to conduct your own interview with a family member who experienced the events of 9/11. You can complete the final column with your graphic organizer to include their information.

Your teacher may ask you to submit your graphic organizer.

Your teacher may ask you to submit your graphic organizer or record your answers on an exit ticket.

How should America commemorate the events of 9/11?

As a community decides to commemorate an event with either a monument or museum, many considerations must be made. How should the event be portrayed? Which perspectives should be included? What artifacts or visual representations should be selected? These elements have a great impact on how that event will be remembered.

Read the excerpt of “9/11 and the Inevitability of Forgetting” on Bunk about how time can begin to erode the details of historic events from people’s memories. Take a few minutes to explore other Connections on Bunk using the "View Connections" button or by selecting an icon next to the stack of cards with related content. You may explore further using the full collection in this Bunk Exhibit. 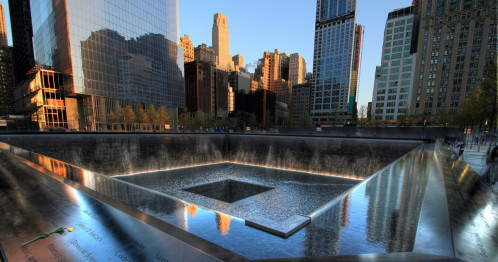 9/11 and the Inevitability of Forgetting

The events of Sept. 11 are etched into the memories of those who were alive that day. As history shows, future generations will feel differently. 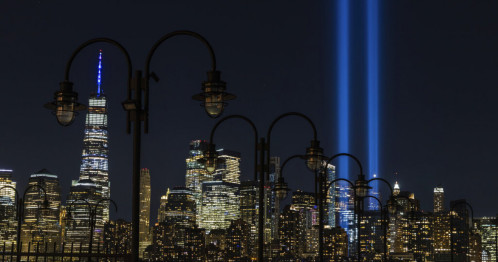 On the 20th anniversary of the tragedy that so many pledged to "never forget," we pause to take stock. To what extent did that day alter the course of American history? In what ways are we still living in its shadow? And what will 9/11 mean for Americans who weren't yet born in 2001?

If you were the designer of a museum that commemorates the events of 9/11, what elements do you feel are needed to honor those who were impacted by the events of that day?  Consider visuals, oral histories, artifacts, art, music, etc.   What elements would best capture the events so that future generations can understand the impact 9/11 had on America?

Once your collection is complete, reflect on the following prompts:

You may also want to look at the memorial sites for the Pentagon and Flight 93 for more perspectives. 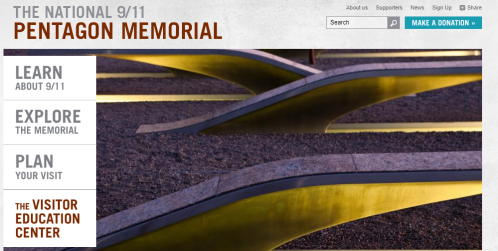 Your teacher may ask you to submit your collection and reflection or record your answers on an exit ticket.

Does America need to revisit its commemoration of other key events in U.S. history?

Search for the topic of Collective Memory on Bunk and select another historical event. 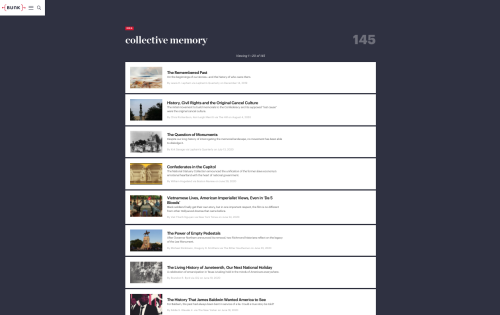 A collection of excerpts on Bunk

Examples of events might include Juneteenth, Civil War statues, the 1918 flu pandemic, World War II, or the arrival of African American to the Virginia colony in 1619.

Finally, you can compose a letter to your local government officials or editor of your local newspaper to propose a way to commemorate the event you chose.

Dittmar, Joe. “Memories of Escaping the South Tower of the WTC on September 11, 2001.” StoryCorps, September 6, 2018. https://storycorps.org/stories/memories-of-escaping-the-south-tower-of-the-wtc-on-september-11-2001/.