What American stories do you already know from public history artifacts on the physical landscape?

You have probably seen many monuments, memorials, and historical markers–maybe even in your local community. Sometimes these public history icons are so obscure that we pass them by without “listening to” their stories at all. Others are so familiar that we don’t even think about the stories they tell.

Make a copy of these collaborative slides. 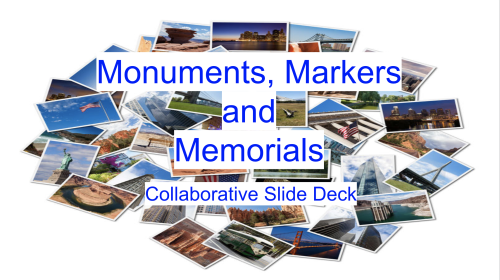 Use the speaker notes feature to take notes as you analyze each image of public history on the American landscape. As you view the collection of images, think about the following questions for each one and jot down your ideas.

In this lesson, you will be exploring stories told by some other monuments and markers in Georgia. One is a well-known monument, and the other is a local public history marker that is probably less familiar to most people. Later, you will have an opportunity to design a monument or marker to tell a local history story of your choosing. In order to prepare for the exploration ahead, you will first need to recall some stories you may have already heard.

Spend a few minutes independently to generate a list of what you know or think you know about each of the following:

Turn and talk to a partner as directed by your teacher. If working remotely, your teacher may allow you to use breakout rooms through videoconferencing or share via a collaborative document such as Google Docs, a Jamboard, or Google Slides.

Next, explore each of these words, names, or places in Bunk. Bunk is a site that helps us make historical connections. 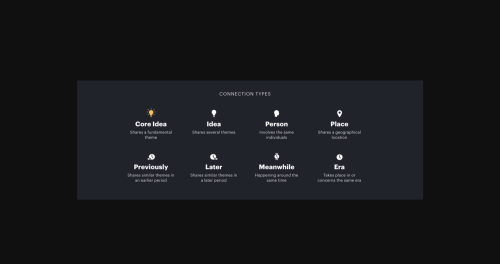 Add your answers to your original list and discuss what you found with your partner.

How are two related but vastly different stories told through the public monuments that commemorate them?

Explore these two stories related to two public monuments/markers and how their stories are told. The first monument is a somewhat (in)famous one located at a state park in Georgia. The second story is much more local to one community in that state. As you explore these monuments and markers, think about the stories that they tell . . . and those they leave untold. 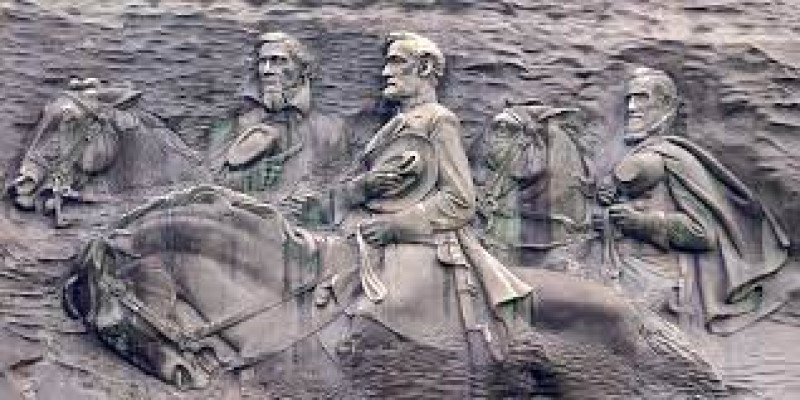 Much has been written in recent years as many cities across the country have engaged in conversations or taken action to remove Confederate iconography. Use the bulleted list below to consider this Confederate memorial located at Stone Mountain, Georgia. You may want to explore this Bunk tag as you respond to the questions independently. 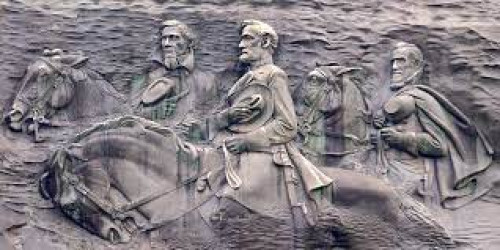 Turn and talk to a partner as directed by your teacher. If working remotely, your teacher may allow you to use breakout rooms through videoconferencing or share via a collaborative document such as a Google Doc, a Jamboard, or Google Slides.

After you and your classmates have completed sharing, make a copy of the “Graven Image” Reflection Questions, and review the questions before you view the video, Graven Image, as shared in Bunk. In your first viewing, do not do any writing, but instead, focus your attention on the video. Watch the video a second time, and respond to each question. 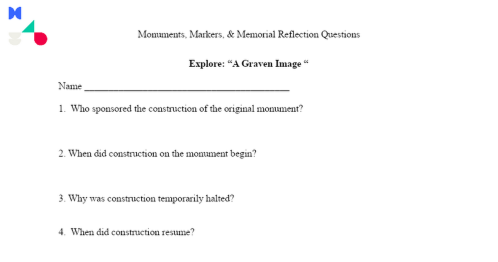 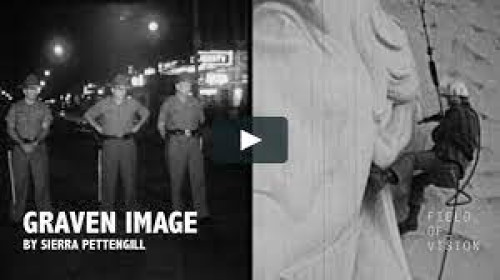 The Painful History of a Confederate Monument Tells Itself

After you have completed your video exploration of Stone Mountain, turn and talk to a partner as directed by your teacher. If working remotely, your teacher may allow you to use breakout rooms through videoconferencing or share via a collaborative document such as Google Docs or Google Slides, or a Jamboard.

Next, explore a less familiar story. Take a few minutes to read and analyze this image of a historical marker: 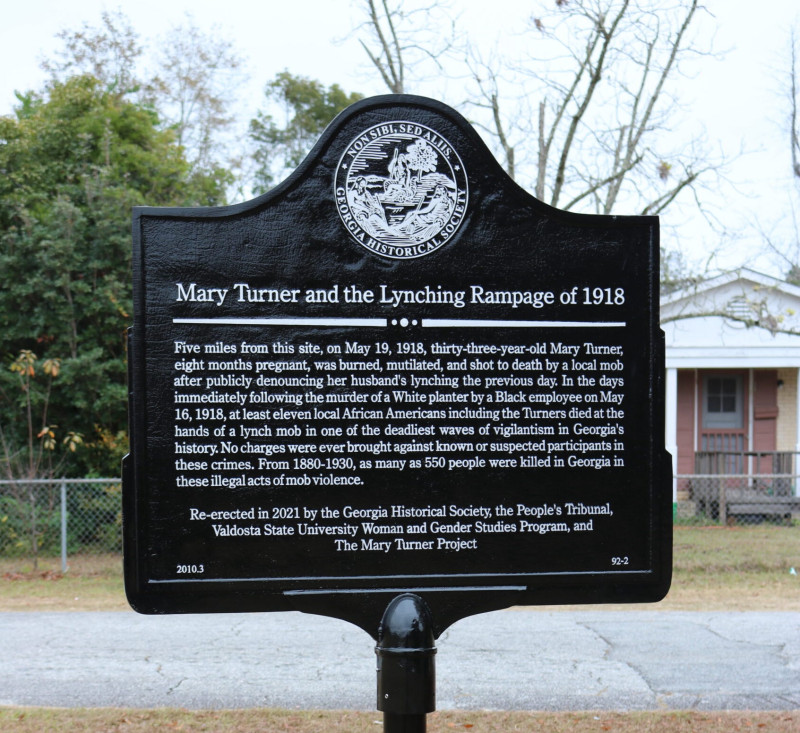 Historical Marker, Mary Turner and the Lynching Rampage of 1918.
Image courtesy of the Georgia Historical Society

Explore this entry on lynching in the New Georgia Encyclopedia. From the sidebar menu, select “Notorious Lynchings.” Scroll down to read the Mary Turner story. 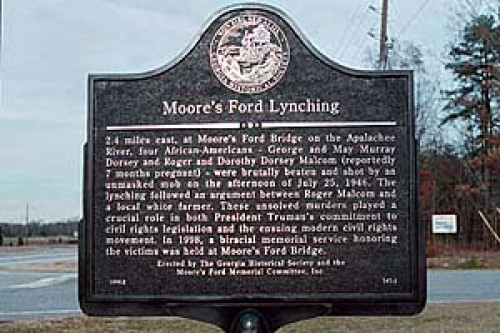 Between 1882 and 1930 the American South experienced an epidemic of fatal mob violence that produced more than 3,000 victims, the vast majority of whom were African Americans. More than 450 documented lynchings occurred in Georgia alone.

When you finish viewing both the video and the readings, complete the Facing History S-I-T graphic organizer to reflect on what you have learned. 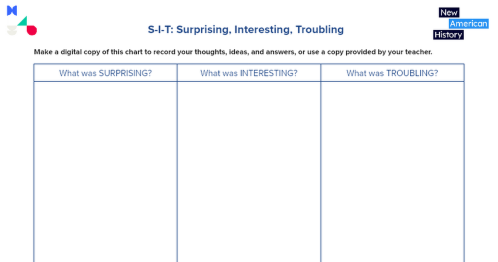 Make a digital copy of this chart to record your thoughts, ideas, and answers, or use a copy provided by your teacher. What was SURPRISING? What was INTERESTING? What was TROUBLING?

Your teacher may ask you to record your answers as an exit ticket.

How might some monuments be related, even though they memorialize very different people or events?

Now that you have learned about these two monuments and the events that they commemorate, you will consider and explore some deeper questions about each. First, view and analyze these three maps: (Note: due to the sensitive historical content, your teacher may choose to have you analyze only 1 or 2 of the maps.) 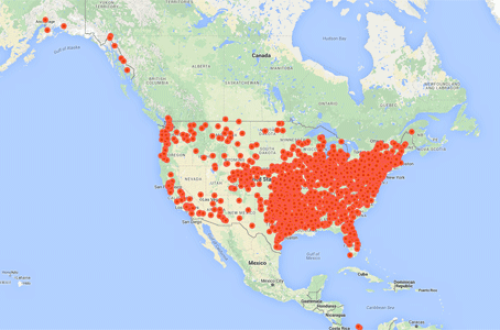 'Mapping the Klan' is a rough timeline of the rise of the second Ku Klux Klan between 1915 and 1940. Each red dot shows a local unit or 'Klavern.' The official numbers for each Klavern indicate a basic chronology for the chartering of the Klaverns, and they also reveal patterns of Klan organizing. 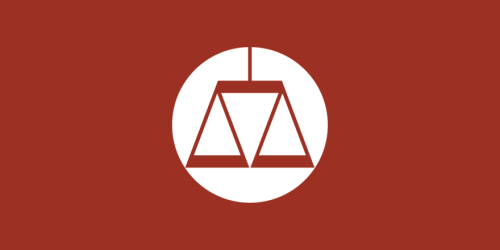 Use the search box on this map to locate and zoom in on the carving at Stone Mountain, Georgia. 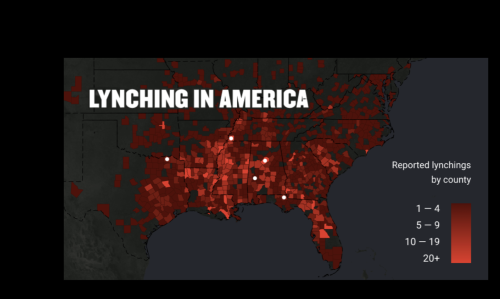 Explore The Map | Lynching In America

Using your previous reflections and discussion notes, complete this Comparing Monuments graphic organizer summarizing what you have learned. You will save the last row until later, and revisit it during the “Elaborate” section of this learning resource. 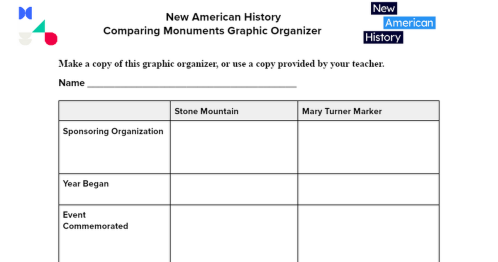 Make a copy of this graphic organizer, or use a copy provided by your teacher.

What stories are these monuments telling now, and how might they be interpreted in the future?

Finally, you will explore what has happened more recently to these historical monuments, and help predict how future generations might interpret them.

Select one or more of the following articles or excerpts, as directed by your teacher. Make a copy of the Monuments, Markers, and Memorials Reading Graphic Organizer, or use a copy provided by your teacher. As you read, complete each section of the graphic organizer for the excerpts or articles you read. 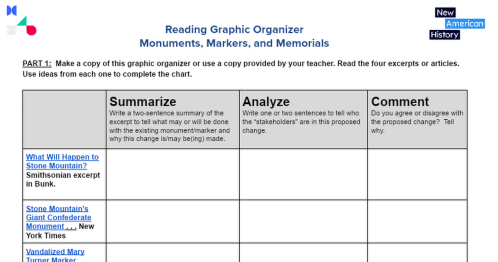 Read each of these four excerpts or articles. Use ideas from each one to complete the chart. Summarize Write a two-sentence summary of the excerpt to tell what may or will be done with the existing monument or marker.

Return to the Comparing Monuments graphic organizer from the “Explain” section of this learning resource and complete the last row, using the new information you have gathered.

Final row in the "Monuments, Markers and Memorials" Reading Graphic Organizer, to be completed in the Elaborate section of these learning resources.
New American History

Finally, complete these Final Reflection questions using the space below on page 2 of the graphic organizer:

What public history story would you like to tell, and how would you tell it? 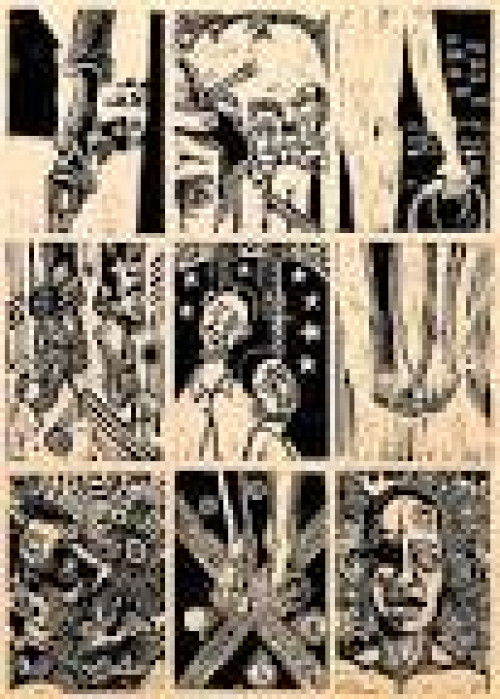 Artist Rachel Marie-Crane Williams created a series of prints (later published as a book) depicting the Mary Turner lynching story. View the artist’s series and read “An Author Replies To The Unspeakable In Her 'Elegy' For Lynching Victim Mary Turner,” a review of the book on NPR.

(Note: This artist’s interpretation of these events may be difficult for you as a student to view. Your teacher will guide you through this activity as you are comfortable with the content. An alternate learning experience is offered below.) 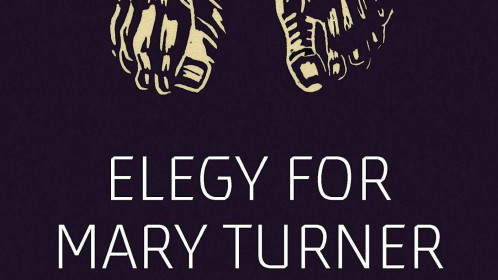 Using original illustrations, archival documents and handwritten text, Rachel Marie-Crane Williams memorializes one black woman, and 10 men, who were killed by white residents in Georgia in 1918.

Alternate learning experience: Analyze this image of the “Tower of Reconciliation,” a sculpture created by artist Ed Wright for the John Hope Franklin Reconciliation Park. Explore the sculpture further via this interactive 3D panoramic tour. 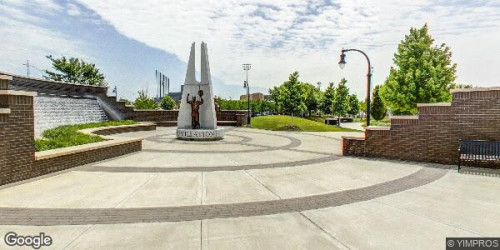 A Literary Landmark and Sites of Conscience designated site.

The park memorializes the Tulsa Race Massacre. Explore this graphic narrative in Bunk to learn more about this topic. 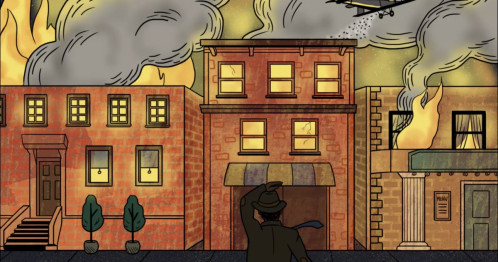 The Destruction of Black Wall Street

Tulsa’s Greenwood neighborhood was a prosperous center of Black wealth. Until a white mob wiped it out.

Afterward, think of a historical event for which you would like to create a monument, memorial, or marker. Create that piece of art or describe it through a mode agreed upon by you and your teacher (example: draw/paint, compose music, create a sculpture or mixed media collage, etc.) Consider the following criteria to help plan your project.

We would love to see what you created - please share your work if your teacher or a trusted adult permits. You may email us at editor@newamericanhistory.org or share via Twitter @newamericanhist or Instagram @newamerianhistory. Be sure to tag us as you share!