Intent vs. impact: What did government policy intend to do, and what actually happened?

In the 1950s and 1960s, the U.S. government gave money to cities to tear down and redevelop what it called “blighted” or “slum” neighborhoods. “Urban renewal” became the term used to describe this program.  Its intent was to revitalize cities economically and counteract white flight.  The program displaced tens of thousands of families from their homes each year, with families of color disproportionately pushed out.  Families were promised payment for their homes or guarantees that they would be relocated to public housing, but these promises were often too late or insufficient to cover the costs of moving.

The photo below shows a moment in the story of urban renewal. 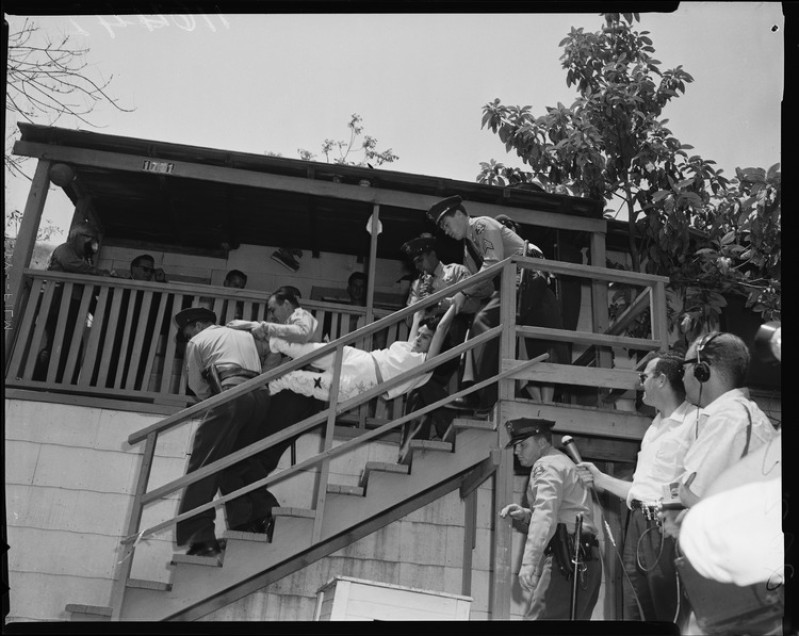 CONTEXT:  Aurora Vargas resisted displacement.  She was physically removed from her home prior to its demolition in Chavez Ravine, Los Angeles, California.  Vargas' home was seized as part of the Temple Area renewal project, which displaced more than 1,600 families to make way for the Los Angeles Dodgers baseball stadium.

VISUAL DISCOVERY:  Analyze this image by adding at least two ideas to each column of your “See, Think, Wonder” graphic organizer. Share your ideas in small groups or with the whole class.  If working remotely, you may use breakout rooms through videoconferencing or share via a collaborative document such as Google Docs, Google Slides, or a Jamboard. 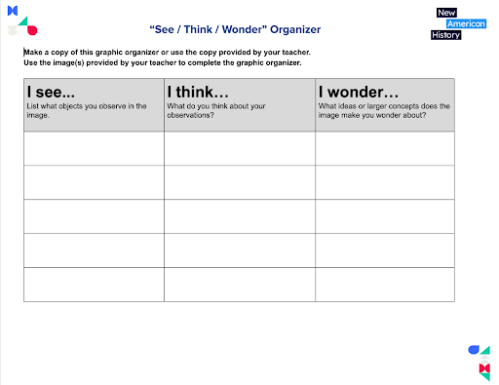 Use the image provided by your teacher to complete the See Think Wonder Graphic Organizer. I see... List what objects you observe in the image. I think… What do you think about your observations? I wonder… What ideas or larger concepts does the image make you wonder abo...

INTENT & IMPACT: Compare the stated intent of the government’s policy with its real-world impact.

Read this illustrated article in Bunk about urban renewal in Roanoke, Virginia. 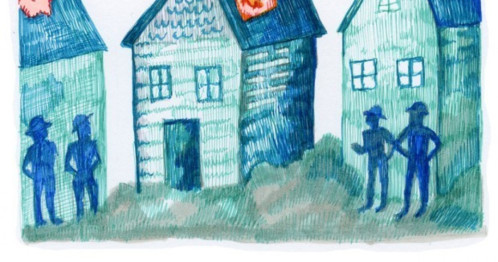 Even the Dead Could Not Stay

An illustrated history of urban renewal in Roanoke, Virginia.

Specifically, focus on the statement made by 33rd U.S. President Harry S. Truman.  Explore some of the Bunk connections made to the article. Turn and talk to an ‘elbow partner,” and share one interesting connection you made. 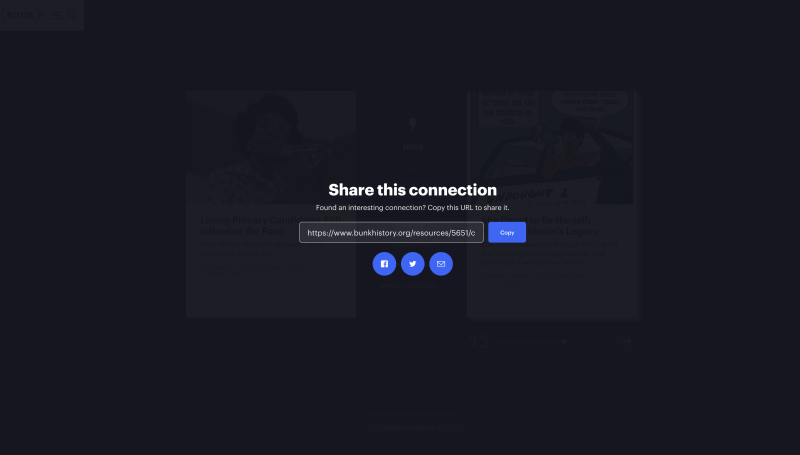 Then, watch this short clip from an interview with James Baldwin, an American writer, and activist (1924 - 1987).

Next, turn to a partner and answer these questions together:

If working remotely, you may use breakout rooms through videoconferencing or share via a collaborative document such as Google Docs, Google Slides, or a Jamboard.

Then, use your ideas from the answers to explore Bunk and find excerpts that relate to urban renewal.  Record your research findings in this 3-2-1 Chart.  Copy and submit when finished, including a link to the Bunk excerpts you used. 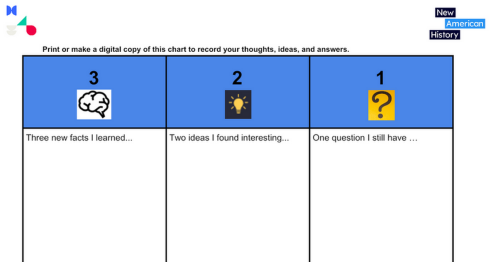 Print or make a digital copy of this chart to record your thoughts, ideas, and answers. 3 2 1 Three new facts I learned... Two ideas I found interesting... One question I still have …

What did urban renewal look like within American cities?

THE BACKSTORY OF URBAN RENEWAL – Urban renewal sought to improve the housing stock in cities.  The thinking behind urban renewal had its roots in the 1930s.  In the depths of the Great Depression, the federal government devised a way to help homeowners.  In 1933, it helped create an agency called the Home Owners’ Loan Corporation (HOLC) to prevent foreclosures and to help distressed homeowners refinance their mortgages.  As part of its work, HOLC assigned grades to residential neighborhoods to signal to banks and mortgage lenders who to give loans to and which areas of a city were safe investments.  If a neighborhood was graded “D” and colored red on the HOLC map, it was considered “hazardous”.  As a result, residents there would be less likely to receive loans.  This HOLC practice of color-coding city neighborhoods to determine their financial risk level has been termed redlining, and it made it challenging for certain residents – especially Black citizens and immigrants – to become homeowners.  Redlining is one government policy that has contributed to America’s social and economic inequalities.

Explore Mapping Inequality, a map digitizing data collected by the HOLC collected from 1935 to 1940.  It illustrates what redlining looked like in more than 200 cities, and includes primary source documents used to collect the data, as well as other essays to contextualize the data. 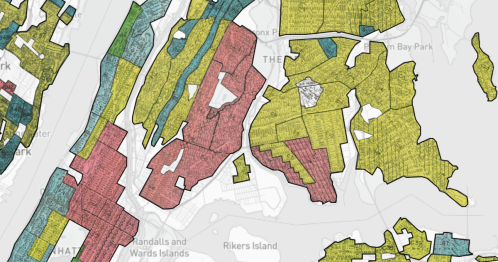 Next, explore the connection between redlining and urban renewal.  First, go to the “Renewing Inequality” map. Click NEXT on the home page, then analyze the infographic sharing the four steps for “How To Use This Map.”  When you finish, click “ENTER.”

Renewing Inequality, How to Use This Map
American panorama, digital scholarship lab, university of richmond

Next, search two cities using the search bar in the upper right corner: Richmond, Virginia, and Chicago, Illinois.  Once each city’s profile and map load, click the tab labeled “1930s Redlining Grades.” (Note: Not all cities included in Renewing Inequality were part of the original HOLC maps, and not all cities mapped by the HOLC were included in the urban renewal programs on the map.) Toggle between the MAP view and the CARTOGRAM view to see all results. Try searching for a city closer to your current location. (If you are in Richmond or Chicago, select another city of your choice!)

Then, answer these questions:

Through the federal government’s urban renewal program, cities displaced hundreds of thousands of families from their homes and neighborhoods.  "Renewing Inequality” helps to visualize these displacements by zooming in on cities and their specific neighborhoods. In groups of three or four, access the “Renewing Inequality” map. Take a few minutes to explore the map, including the ways data is visualized. Refer back to the How to Use this Map Infographic from the as needed.

Examine urban renewal from 1950 to 1966 in America by making a copy and completing this Data Organizer.

STEP #1 Open the “Renewing Inequality” map. Read the article on the right of the home page entitled “Nationwide, 1950-1966”. Answer the questions below after you read. Who funded the urban renewal projects, and what time period does the map show? What was the goal of urban renewal, acco...

How did the federal government perpetuate social inequalities in American cities?

Go to the homepage of the “Renewing Inequality” map.  Select the link along the top left side of the menu,  entitled “The People & the Program.” 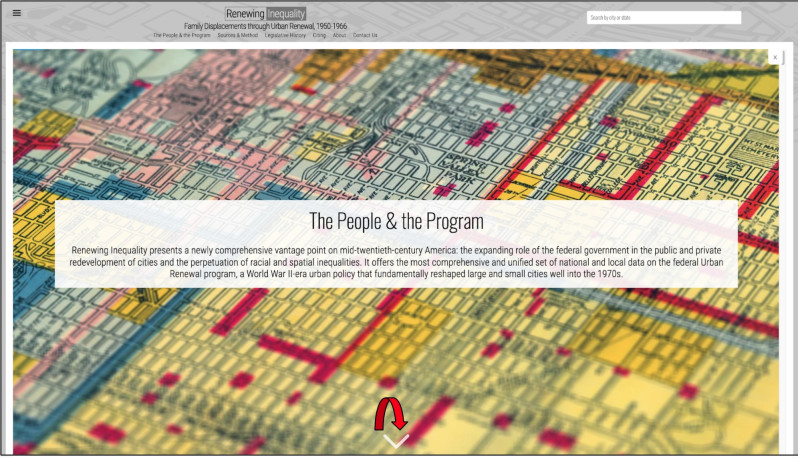 Scroll down through this StoryMap embedded in Renewing Inequality,  and read all of the accompanying text.

Revisit this question, based on your previous explorations of the Renewing Inequality map and additional information you learned from the People and the Program section of the Storymap.

After you read, review the People and the Program StoryMap and complete this “Read and S-I-T” graphic organizer. 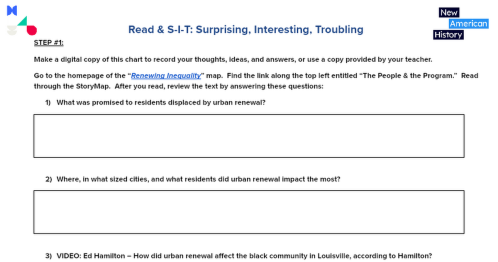 STEP #1: Make a digital copy of this chart to record your thoughts, ideas, and answers, or use a copy provided by your teacher. Go to the homepage of the “Renewing Inequality” map. Find the link along the top left entitled “The People & the Program.” Read through the StoryMap. After you re...

After you complete the graphic organizer, share your ideas within small groups or with the whole class as directed by your teacher.

If working remotely, you may use breakout rooms through videoconferencing or share via a collaborative document such as Google Docs, Google Slides, or a Jamboard.

What were the costs and critiques of urban renewal?

Urban renewal programs invited municipalities and real-estate firms to redevelop land they deemed “blighted.”  Aside from displacing residents, the programs built highways through neighborhoods to entice suburbanites to the cities they had left.  The programs disconnected social life and tore at the fabric of existing communities.  However, some critiqued the assumptions that fueled urban renewal and pushed back against city planners.

Explore this Bunk Connection by reading excerpts from “Jane Jacobs vs. The Power Brokers” and “What It Looks Like to Reconnect Black Communities Torn Apart by Highways.”

Before you read, review the questions in the “Take Note” Thinking Routine.  After you read, you will choose one of the following questions to answer.  Don’t try to take notes as you read; focus instead on becoming fully engaged in the reading. 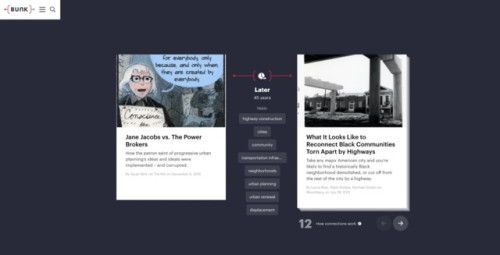 “Jane Jacobs vs. The Power Brokers” and “What It Looks Like to Reconnect Black Communities Torn Apart by Highways” - A Bunk Connection

When you finish reading, answer one of the Take Note questions above.  Your teacher may provide access to a Padlet or Jamboard discussion board, or allow you to collaborate on a Google Slides set.  Your teacher will debrief by reviewing the main ideas of each piece and by reading back student responses to the class and asking follow-up questions or by asking you to turn and talk to a partner to share your answers.

Lastly, you will end with a discussion of this Exit Question, using ideas from the readings:

What were the costs and critiques of urban renewal?

How can local, state, and federal governments right the wrongs of urban renewal?

Scholars and policy experts have shared many suggestions and solutions for how to address the inequalities and injustices perpetuated by family displacement during this period of urban renewal.  Explore this Bunk Connection by reading excerpts from “Evanston, Ill., Leads the Country With First Reparations Program for Black Residents” and  “A Black Vision for Development, in the Birthplace of Urban Renewal.” 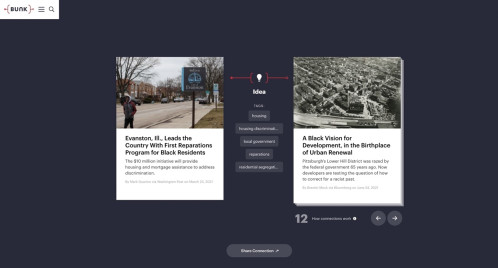 “Evanston, Ill., Leads the Country With First Reparations Program for Black Residents” and  “A Black Vision for Development, in the Birthplace of Urban Renewal.” - A Bunk Connection

Turn and Talk to an elbow partner, each taking turns to summarize one of the two excerpts. Next, read each article in its entirety, using the links at the bottom of each excerpt.  After you do, answer these questions: 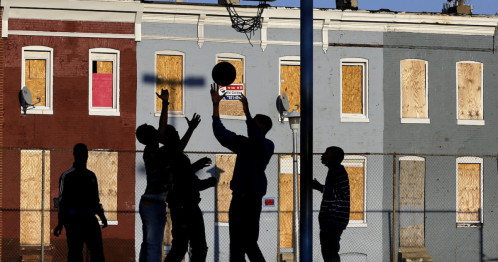 More than a half-century after the passage of the Fair Housing Act, American cities are still profoundly segregated. Who and what is to blame? This exhibit explores the complex legacies of redlining, urban renewal, and financial deregulation to explain the persistence – and costs – of residential segregation today.

Then, conduct research to propose your own solution.  To organize your proposal, research excerpts from this Bunk Exhibit on “Housing Injustice” and complete this Proposal Form. 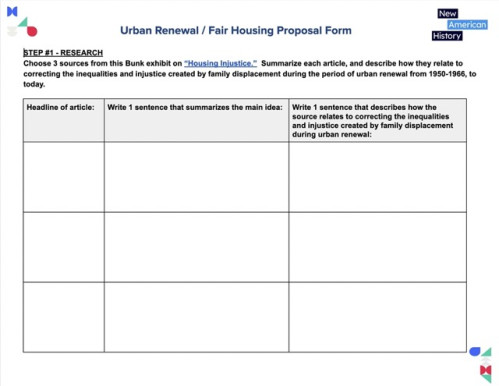 STEP #1 - RESEARCH Choose 3 sources from this Bunk exhibit on “Housing Injustice.” Summarize each article, and describe how they relate to correcting the inequalities and injustice created by family displacement during the period of urban renewal from 1950-1966, to today. Headline of artic...